Just FYI, there is an affiliate link in this post meaning that I receive payment if you are to use my link. But as you’ll see, this is a product I genuinely love and one I have used myself.

Today I wanted to talk about my experience with a Nootropic called Alpha Brain.

But first you probably want to know what on earth a Nootropic is.

The term “nootropics” was coined by a scientist named Dr. Corneliu E. Giurgea. He developed a compound called Piracetam which has made a name for itself as being a brain enhancer, according to The Atlantic. The word is derived from the Greek noo, meaning mind, and trope, which means “change” in French. Basically, all nootropics aim to change your mind by enhancing functions like memory or attention.

I became aware of Nootropics several years ago and experimented with many different products in an attempt to enhance my brain function. Looking back now I can see that this was me trying to help my ADHD, but I didn’t realize that at the time. All I knew was that my brain didn’t function “good enough” by the world’s standards and I felt the need to catch up to everyone else.

With most Nootropics I tried, I found the side effects to be more annoying than any benefit I got from them. I would usually get headaches or feel over stimulated, and while I did feel a noticeable effect on my brain power, the benefit just wasn’t worth the side effects.

Now, Nootropics will affect some people differently than others. So keep that in mind while reading about my or anyone else’s experiences with them. Just because a Nootropic works or doesn’t work for me doesn’t necessarily mean the same will be true for you.

And I’d also like to make sure you know that I am in no way suggesting that a Nootropic should be used to treat ADHD or any other disorder. I am absolutely not a medical doctor and it’s not my place to be able to say something like that. I’m simply sharing my personal experience with a Nootropic that felt helpful for me in my battle with ADHD. But eventually I did switch to actual medication and I discontinued my use of Nootropics because I didn’t know if it was safe to combine the two.

So with all of that said, I want to talk about a Nootropic I found that I genuinely loved.

It’s called Alpha Brain, and it’s created by a company called Onnit. You may have noticed that I have some banners on my blog now for supplements from Onnit. I’ve recently become an Onnit affiliate, and I’m very excited about this because they’re a company I actually truly admire. I’m very proud to be affiliated with them. They’re all about optimizing your mind and body and of course that’s something I’m pretty passionate about. If you ever listen to the Joe Rogan Experience podcast you’ve probably heard them mentioned more than a few times. That’s how I learned about them in the first place.

And they have created one of the only Nootropics I’ve tried that I had zero side effects from. I didn’t get the dreaded headache, I didn’t feel jittery or over stimulated… I simply felt my brain working better. Like much better.

I found that I was able to articulate my thoughts with precision, whereas normally my thoughts would be racing too quickly for me to grab them and turn them into well thought out sentences.

I also found myself getting housework done that would normally pile up on me. I was on-top of all my chores, at least way more than usual. I was in a good mood, and even found music to be more enjoyable.

Alpha Brain boasts a substantial memory improvement too, and for someone who has a lot of trouble with their short term memory (a common issue for us ADHD brains), I can say that it most definitely helped in that area.

When someone said something to me, I didn’t forget it immediately and have to ask them to repeat themselves. I just remembered right away and was able to carry on a normal conversation without the usual “what did you say again?” sprinkled throughout.

All in all, this Nootropic was a god-send for me at the time that I was taking it. And not just me. My boyfriend also took it and reported similar benefits. He has ADHD too and found it to be very helpful, especially with motivation and helping him actually start things instead of procrastinating all day.

The only reason we stopped taking it was because our finances got a little tighter and we had to take a lot of things out of our budget. Then eventually I started on ADHD medication and decided not to start back with taking any Nootropics because I’m unsure if it’s safe to combine a Nootropic with a prescription medication. So if you’re on a medication I would talk to your doctor before making any decisions to try Nootropics.

But if you’re able to and Alpha Brain sounds like something you want to try, you can try it for free by using my link. Of course, being affiliated with them means that if you sign up for the free trial using my link I will earn some money. But like I said before, this is a company I’m proud to be affiliated with and any money I make is simply icing on the cake.

A free trial is how I tried it for the first time. I got a free 7 day supply of it to make sure I liked it before deciding to actually pay money for it. Wouldn’t it be nice if every product let you try it first?

Anyway, to try it for free you can click through below. And if you try it or have tried it before, I’d love to hear about your experience in the comments! Did you love it? Did you hate it? What benefits or side effects did you experience, if any? 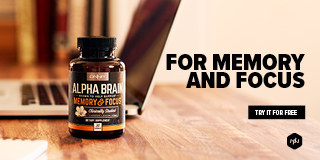 Until Next Time,
Keep Calm and Grow On

Hey Brittany! I tried a Nootropic back in college called Neurofuse. I found it helped me way better than Adderall, which just made my anxiety way worse. Like you said, it actually helped me organize and communicate my thoughts, and hold onto things I wanted to say instead of them just zipping in and out of my brain. I stopped getting it because it was just too expensive. But I’d love to give Alpha Brain a try! I’m not seeing the affiliate link tho?

Buy me a coffee?

Enroll in my Free Course